The potato isn’t actually a root vegetable. The potato is a tuber, which is a part of the underground stem. The tuber survives the winter frost underground as a source of stored energy in the form of carbohydrates – which is why potatoes are so damn delicious; they’re mostly complex sugar!

These carbs help regrow the plant the next growing season by using the stored energy for shoots that grow out of the “eyes” of the tuber to ultimately produce the branches and leaves of the plant above ground.

New potatoes grow from the overshoots of the main stem and not from the plant’s roots as you might expect. Potatoes are in the same plant family as tomatoes, tobacco, eggplants and peppers (the nightshade family), so you can think of potato growth in that way (as an underground tomato!).

Many gardening purists argue you should only use sterilized “seed potatoes” instead of overgrown spuds from the grocery store because the latter may harbour disease.

But buying seeds every year isn’t frugal. I used shoots that were sprouting out the eyes of store-bought potatoes. I would otherwise have thrown these potatoes away since they become shriveled and mushy (as well as losing sugars and vitamins).

You can buy potatoes for very little money on sale from the grocery store so it doesn’t make financial sense to buy seed potatoes unless you’re purely concerned about the joy of gardening or growing specialty varieties.

You can cut your potatoes up with one eye on each piece. Leave the cut pieces out in the sun for a day for the cut side to cure and prevent rot.

You can plant potatoes early in the spring since the underground is usually protected from the frost. Start beginning of April or whenever the snow melts. You can protect against extreme colds in the spring by covering the ground with landscape fabric or plastic sheeting wherever the potatoes are planted.

Plant the potatoes about 10 cm deep, 30 cm apart in rows that are 60-90 cm apart from one another. Plant the eyes pointing upwards.

You want rich, well-drained, deep soil for the spuds to grow. Use compost, manure and earth.

Keep the soil moist but not damp. Mulch can aid retaining moisture if it’s a hot, dry summer.

Keep the soil loose and keep it moist until the plant dies (about 2-5 cm of water per week depending on dryness of the season).

Potatoes grow in a slightly acidic 5.0 – 6.5 pH range. Don’t over fertilize the soil or the potato plants may become leggy (stick to high phosphorus, low nitrogen formulas if you use fertilizer). Use your homemade compost if available.

You want to mound up around the base of the plant about another 10 cms to cover up the stem overshoots so that potatoes can grow underground away from the sun. Continually mound the soil around the plant to allow it to grow larger tubers. Hilling protects the root system, gives room for tubers to grow, prevents green potatoes from forming and allows for drainage and airflow.

Let the soil dry out for the potatoes to cure in the ground once the plant dies.

We don’t have the option of two main harvests in Canada like they do in warmer areas of the world where people can plant a new crop in the fall. We have to settle for growing in the spring. You can plant potatoes before anything else. Anywhere from April to May. You can squeeze in two smaller harvests if you like (April-July, July to September).

Basically, there are two stages you can harvest your potatoes.

The potatoes are smaller and softer. I find they tasted like pre-made mash potatoes. Young potatoes come 1 to 2 months into growth and will appear after the flowers.

Like you would get at a grocery store. Mature potatoes come as the plant begins to wilt. If left to cure in the ground, the skins will harden and offer better protection from rot. You can leave the later potatoes in the ground well past the withering of the plant so that the tubers better preserve themselves for winter storage. Dig them out before the first frost.

You can test the potatoes for maturity. If the skin slides off, you have immature potatoes. Cook these up since they won’t store.

Wait for a dry spell of a couple of days before the harvest so the potatoes are relatively dry coming out of the ground.

Any damaged potatoes should be eaten rather than stored. 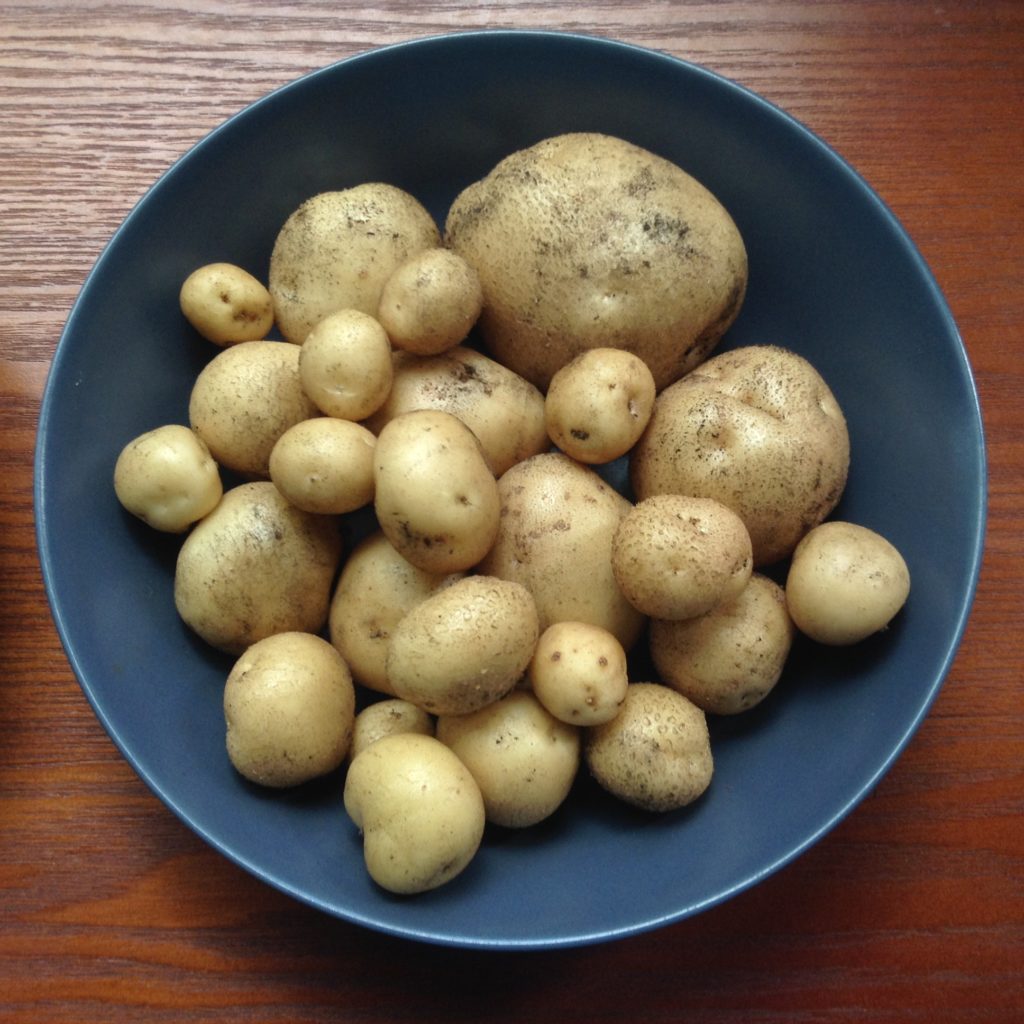 Potatoes are infamous for the blight that cut Ireland’s population in half. It arises from disease and wet weather. Throw out any potatoes that appear to be harbouring disease and could spread to the next year if you’re re-sowing your potatoes.

You can mitigate disease by rotating your potato crop (and other nightshade crops) in three year cycles, allowing the soil a chance to clear the diseases and also returning nutrients to the soil since different plants add or subtract different nutrients. If you don’t have enough room for rotation, you can plant potatoes in a bucket and then reuse the soil in potted plants or other areas of your garden where you’re not planting the above-mentioned family of plants (perhaps your flower or herb beds).

Potatoes are ideal for storing in a root cellar. Find a cool, dark, well-ventilated, slightly humid area for storage. The humidity prevents shriveling. The darkness prevents greening and sprouting. The coolness and ventilation prevent rotting.

Don’t wash the potatoes as the moisture will encourage rot. Leave them to dry further for a few hours before you move them to the root cellar.

Store in a bin with soil (or shredded paper) to preserve them over the winter. Don’t wash the potatoes until you’re ready to eat them.

Store them away from onions and fruits (such as peppers you may be drying). The same principle that matures veggies in your fridge applies to your root cellar since fruits emit ethylene gas.

Towers are a good option if you want to minimize your planting area. Many varietals won’t grow multiple layers, so this option only really works for Russet (baking) potatoes and some other varieties. Many of your typical varieties (like Yukon Gold) won’t grow another layer of tubers.

You want some kind of open tower (a plastic basket, chicken wire, fencing) to allow for sunlight to reach leaves and moisture to drain. You can pad against the fencing with straw or cut grass so the soil doesn’t fall out. Progressively add soil as the plant grows to keep the tubers covered.
This method doesn’t seem to increase yield over traditional methods but it will save you space in a small backyard and will allow you to hill soil around the plants with ease. You can also disassemble the tower and harvest the potatoes easier than digging through the soil.